Fresh from almost 4 months in the U.S. and Europe, Ryan will be sharing stories and perspectives from Occupy encampments around the country and their counterparts in Europe, and helping stir up energy for the Occupy movements "Spring Offensive"!

"Ryan has been writing and performing hard-hitting political folk songs for over ten years. A part of the Riot-Folk Collective, his music is aimed to support those working for positive change and to educate people about issues of peace and social & economic justice."

He is also touring to promote his new album Ordinary Heroes, a collaborative work with violinist/journalist/documentarian Michael Fox. The recording, dedicated to historian and activist Howard Zinn, emphasizes and celebrates social movements as a means of overcoming injustice.

Ryan's songs can be downloaded and purchased at http://www.ryanharveymusic.com/ or at http://www.facebook.com/pages/Ryan-Harvey/207795152640654. 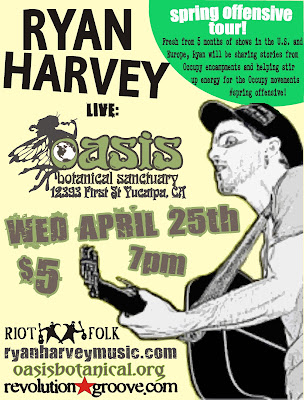 Posted by Revolution Groove at 10:50 PM